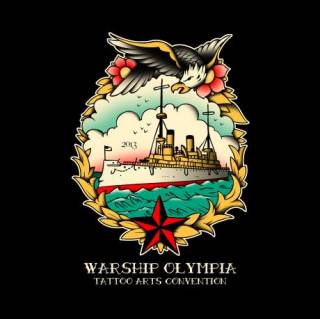 By land or by sea, the Philadelphia event will bring the public, tattooers and sailors aboard for three days of heavy-hitting history and tattoo tradition in Philadelphia.

Wednesday, May 11, 2017. Philadelphia, PA- For the fourth time since 2010, the Warship Olympia Tattoo Arts Convention will welcome over 100 tattooers to set up shop on the decks of this historic Cruiser Olympia at Independence Seaport Museum in Philadelphia.

The public and tattooers alike will be able to explore the nautical roots of the American tattoo tradigiton aboard an actual naval ship. This unique live tattooing event was announced today by Philadelphia artist and founder of the nationally touring tattoo convention operation, VillainArts.com, the “Tattooed Kingpin”, Troy Timpel.

Villain Arts will bring in the best of the best old-school tattoo-makers along with cream of the crop new artists in the industry. Representing tattoo shops from all over the country, the artists will be tattooing live aboard the Cruiser Olympia over the 3-Day weekend. The twofold exhibition also includes a traveling collection of tattoo history, antique tattooing equipment, original tattoo flash by the early American tattoo masters, objects of Pacific Exotica, photographs of sailors and tattooers, plus their drawings, letters and legacy; the expanding Villain Art’s “Tattoo Museum“. For added interest, tattooers will be creating their work the old-school way, using acetate stencils from the original collection of Philadelphia Tattoo hero, “Crazy” Philadelphia Eddie Funk.

Inside the Seaport Museum is the Tattoo Lounge, designed to present the role of that tattoos in the life of the sailor at sea and the birth of the American tattoo tradition.

The Warship Olympia Tattoo Arts Convention is designed as a much smaller show than an average Villain Arts Convention, and meant to enrich and pay tribute to the many men and women that wore tattoos or made them, and thereby brought the craft’s American industry to life. Olympia is docked on the Delaware River, by the Spruce Street Harbor Park on Penn’s Landing.

Tickets are only sold at the show

Children under 12 are free